By Julie Freestone and Rudi Raab 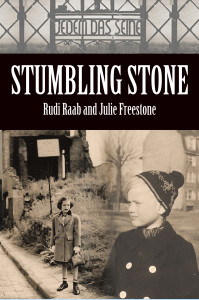 A friend, who is a published author, commented when she received an invitation to our book launch party that she had never heard of a book launch. Book readings and book events, but not a launch. In fact we think we had several stages and types of launches for our historical novel Stumbling Stone.

Several months before our book was published, we had our first “virtual” launch — an email and press release announcing the debut of our Stumbling-Stone.com website. We wanted the site to build a buzz for the book. The press release we sent out hyping the website resulted in a feature story in the J, a Jewish newspaper. 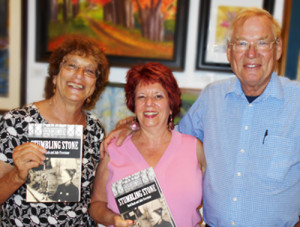 Julie and Rudi with Fran Trant, who bought three copies of the book at Once Upon a Canvas in Benicia as gifts. (Go Fran!)

Just about the time the print version of the book appeared, we launched our Facebook page. We use posts on the Facebook page to invite people to our book events and to view our website, where we frequently post blogs related to the book.

Our third virtual launch was an email sent to more than 200 friends, colleagues, acquaintances and anyone else we could think of announcing the arrival of “our baby,” the print version of the book. In the email we suggested a number of things people could do to help us, including writing reviews on Goodreads and Amazon, ordering the book through their independent book stores and letting their friends know. Immediately, that email resulted in invitations to do an event in a synagogue and another at an art gallery. 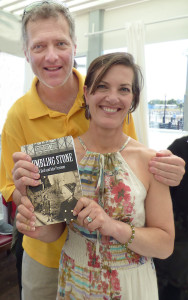 Julie’s son Mike Maurer and his wife Janette Maurer at the launch party. “We posted that on our Facebook page and it reached almost as many people as our more-serious posts do.”

What we actually called our “launch” was a party we had to thank the friends and family who had supported us through two decades of revisions, changes in direction and recommitments. More than 80 people attended and we sold almost two dozen books. We were also able to announce several upcoming book events and encourage the group to attend and bring others.

Then Book Passage, a very respected independent book store that has many events for well known authors, hosted what they referred to as our book launch. We were invited to do the event because we were part of their Path to Publishing, for self-published authors. They publicized the event and 50 people attended, a number of whom said they had friends and family who wanted to come to other readings. 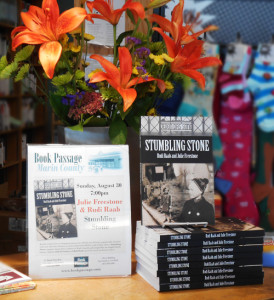 Now that the first quarter is over, we feel our baby has been birthed and we’ll move into a new stage beyond launching. We hope the next phase is as much fun as the first one.

A note from your editor:
Notice that Julie mentioned how much reach her Facebook post — with a photo of her son, his wife, and the book — had. Facebook might not seem like a serious way to get the word out, but posts with photos of people do tend to have broad appeal.